I spot a Snow Leopard 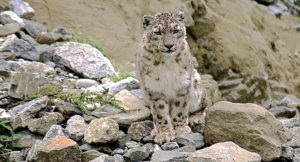 It was in the summers of 2009, I was holidaying with my friends in the land of high passes ‘Ladakh’. My intent was to cover all the ancient old monasteries and most importantly Pangong Tso & Tso Moriri Lakes. So one day after finishing our day tour we were heading towards the hotel & on the road, we were crossed by this strange looking animal with its little one. The driver immediately stopped the car when I asked what is it? He cried it is a ‘snow leopard’. As soon as he exclaimed ‘Snow Leopard’ I was taken aback because before that day I knew only one species of the leopard which is majorly found in the deep dense forest. We were unfortunately lucky, lucky because they were crossing us from an inch away and unfortunate because we were so hypnotized by the leopard and especially its cub that we forgot to take there picture how doltishly stupid of us. Remembering the incident I realized how blessed India is with so many majestic cats living in the country be it Asiatic Lion or Bengal Tigers or Snow Leopard. Today India is not only seen as the fastest growing economy but also a humble abode for so many gorgeous but endangered creatures. The appropriate steps taken by the wildlife conservationist’s communities and government of India is commendable. Now it’s our job to make every citizen of this country proud of our rich wildlife and how our actions are directly responsible for their life and death.