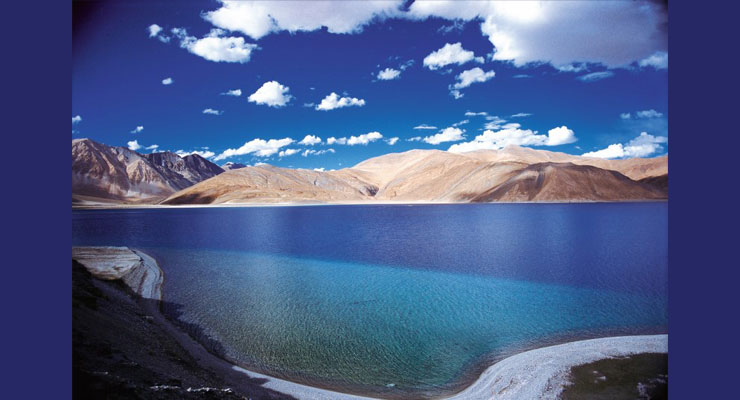 Day 1 – The Snow Leopard and Bird photography tour commenced with the arrival in Delhi. The Group arrived at New Delhi, spent the day in leisure.

Day 2 & 3 Delhi – Leh (3,500 m) – By Flight 9W – Depart at 0630 hrs / Arrive at 0745 hrs After A day of rest and getting acclimatization with the aid of my Diamox tablets, which made it easier to cope with to the high altitude. The Following day after a good night rest we began our tour after breakfast. We scanned the nearby areas of Leh, spotted many (water birds) Wallcreeper, Ibis Bill, brown dipper, Mallard, Winter wren, Solitary Snipe, Common Pochard, Ruddy shelduck. In the nearby dry grounds, rocky hills the following were sighted Robin Accentor, Brown Accentor, Red-fronted Serrain, long leg buzzard and upland buzzard.

Bazaar visit- we strolled along the main bazaar, observing the varied crowds. Looking into curio shops is an engaging experience. A particularly attractive sight is the line of women from nearby villages sitting along the edge of the footpath with baskets of fresh vegetables brought for sale. Behind the main bazaar, Chang Gali is less bustling but has interesting little shops selling curios and jewelry. We did manage to sight birds near the Bazaar  Grey Wagtail Motacilla cinerea,  White-throated Dipper, Winter Wren, Robin Accentor and  White Wagtail

The next day was scheduled to visit the Hemis National Park to sight the Snow leopard (Panthera uncia). With its secretive nature and rocky habitat, a perfect camouflage makes sightings of the snow leopard rather difficult.  Like most Big Cats the snow leopard is most active during early hours of the day and the evenings so we planned to start early the following morning.

Day 4 – We traveled to the Shey marshes, yet another birding hotspot near Leh.

The sighting in Shey was This area is excellent for many species including hey marshes are just 7-8kms from Leh, along Sindhu (Indus) river. A lot has been written about this place by many renowned bird-watchers, Once a breeding ground for many species of wild ducks, these marshes were now home for few domesticated ducks. However the Shey marshes were not a disappointment as the lovely green marshes & surrounding areas gave us good views of birds like Eurasian Magpie, Carrion Crow, Citrine (in full breeding plumage) & White Wagtails, Hoopoe, Black Redstart, Mountain Chiffchaff etc.

The next 5 days were to be spent at the Hemis National Park, in the Rumbak Valley, we spent time scanning for the snow leopard. On route, we spotted birds of the region such as the Chukkar, Himalayan snow cock, Golden Eagle, Lammergeier. After an entire day driving past snow-clad mountains, scanning for the Snow leopard, we spotted a Mountain Hare, the Pikka a small mountain rodent.

It was not until the second day, after hours of tracking the elusive cat late in the afternoon we finally sighted the Snow leopard. Excited to see the beast we followed it for a while until it started getting dark and was time to head back to camp.

Thrilled and excited to have spotted the Snow leopard the previous day, we started early at 6:30 am from our mountain camp. After almost an hour of scanning, we spotted the Snow Leopard 7:30 am, we followed it around for hours and realized it was on a hunt. The Snow Leopard mainly preys on the bharal (Himalayan blue sheep) We were ecstatic to have the opportunity to watch the big cat as it set its eyes a herd of Blue Sheep. Our distance from the cat was about 700 mths, we waited and watched as it attempted to make a kill on the herd. Luck favored the herd as they fled in great speed. Our Group followed the Snow leopard till late in the afternoon, finally, around 4: 30 pm when it became evident that we could follow no further, we turned back and headed for our mountain camp.

We got the news early morning, of the snow leopard being sighted near the Rumbek Village. The Rumbak village consists of 9 family homes mostly locals (Tibetan Refugees). The villagers run cozy homestays for tourists visiting the area. The villages filled with Tibetan prayer flags, the kitchens are where the families gather around. These Ladakhi homestays serve Tibetan dumplings and noodle soup thukpa, barley porridge tsampa and delicious homemade jams. We continued scanning the mountains for the Snow leopard. Spotted a golden eagle soaring above us. After hours of scanning the craggy mountains, we spotted the snow leopard at a close distance of approximately 300mts. The close sighting was a great opportunity for fellow photographers as they took stunning shots. Birds sighted in the region were the Great Rosefinch and the Streaked Rosefinch, Hill Pigeon and White Browed Tit Warbler.

The following Morning After breakfast, we left for the Rumbak Valley for wildlife and bird photography. We arrived at a frozen waterfall, the landscapes were just out of this world. The species of birds we spotted were the Brandts mountain finch, Plain mountain finch, Chukkar, Snow Partridge, Solitary snipe, Tibetan snow finch, Himalayan snowcock. It was not until late afternoon when we finally sighted the solitary beast, we followed it for a while before we returned to camp.

Post Breakfast we returned to Leh, on a route we spotted the Black Magpie, Solitary Snipe, White Winged redstart, Wal creeper, black-throated thrush, golden eagle, brown dipper, Himalayan Griffon. Arriving in Leh we checked in to the Hotel and had lunch. Later in the afternoon, we visited the Thiksey Monastery. Considered the most beautiful Monastery it hosts many devotees and visitors. The last night we spent at the hotel in Leh.