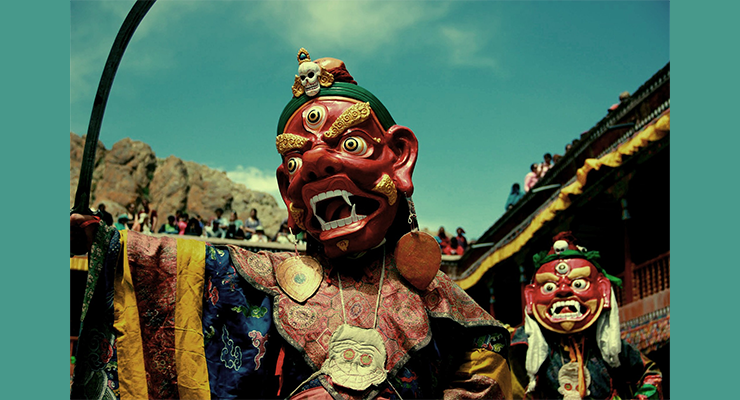 Being geographically and historically close to Tibet, the culture Ladakh is distinctly Tibetan, making it a unique region in India.

Buddhism in Ladakh is ancient and widespread, and even today the population of Ladakh is predominantly Buddhist. Ladakh has been deeply influenced by Tibetan Buddhism, which follows the Mahayana and Vajrayana schools.

It is no wonder then that Ladakh is home to so many beautiful monasteries. Set against the backdrop of rugged snow-capped peaks and high-altitude desert, the monasteries of Ladakh are a wondrous sight and have a spiritual aura that is almost second to none.

This tour is specially designed for one to visit the beautiful monasteries and gompas of Ladakh, as well as soak up the rich culture and history that this region has to offer.

Arrive at Leh airport by morning flight from Delhi. This flight is one of the most sensational flights in the world. On a clear day from one side of the aircraft can be seen in the distance the peaks of K2, Nanga Parbat, Gasherbrum and on the other side of the aircraft, so close that you feel you could reach out and touch it, is the Nun Kun massif.
Upon arrival you will be transferred to your hotel. Allow yourself a little time to settle in and acclimatize since you have gone from a relatively low elevation in New Delhi to over 11,000 feet! During the afternoon, you can walk through the old town, beneath the Leh Palace, to explore this fascinating city. Overnight in hotel.

Day 02: Leh – Saboo Gompa – SOS Village (Choglamsar)
The morning is at leisure to acclimatize to the rarefied air. You may choose to stroll along the main bazaar, observing the varied crowds. Looking into curio shops is an engaging experience. A particularly attractive sight is the line of women from nearby villages sitting along the edge of the footpath with baskets of fresh vegetables brought for sale. Behind the main bazaar, Chang Gali is less bustling but has interesting little shops selling curios and jewellery. Further on are the labyrinthine alleyways and piled-up houses of the old town, clustering around the foot of the Palace Hill. In the other direction, down the bazaar, are the Tibetan markets where one can bargain for pearls, turquoise, coral, lapis lazuli and many other kinds of semi-precious stones and jewellery, as well as carved yak-horn boxes, quaint brass locks, china or metal bowls, or any of a whole array of curios. When tired of strolling, one can step into any of several restaurants, some of them located in gardens or on the sidewalks and serve local Tibetan, Indian and Continental cuisine.

In the afternoon you will drive to Saboo Gompa, standing majestically on top of a hillock overlooking the Indus Valley. It is a less frequented gompa in Leh.

On your drive back to Leh, you visit SOS Village (Choglamsar), an important centre for the study of Tibetan culture and history. There is the “Central Institute of Buddhist Studies”, a Tibetan library, medical centre, shops selling handicrafts, books, and plenty of restaurants. It abounds in greenery with poplar and willow trees dotting the landscape. There is a golf course, horticulture nurseries and a polo ground as well.

Day 03: Leh – Takthok Gompa – Chemrey Gompa – Hemis Monastery
The day’s tour of monasteries begins with a visit to Takthok Gompa in the morning.The monastery belongs to the Nyingma-pa Sect.

Returning from Takthok, the Chemrey Gompa rises majestically on a hill with the residences of the lamas spilling along its contours. Continue your drive to Hemis Gompa, the most famous of Ladakh’s monasteries, crossing over the Indus River at the village of Karu.By the evening drive back to your hotel for dinner and an overnight stay.

After breakfast, drive to Alchi. En route you would be taking a short diversion to visit Phyang Gompa, which is located on the right of the main highway. After visiting Phyang you will be visiting Basgo Palace. The largest of the three shrines, all of which are dedicated to Maitreya, has been described as ‘after Alchi perhaps the most beautifully painted temple in Ladakh’.
You will arrive in time for lunch at Alchi resort.

In the afternoon visit the Alchi Gompa. The complex of temples located within the village is the most celebrated of Ladakh’s monasteries and dates back to the 11th century. Alchi Gompa is the only monastery, built on flat ground. It is very famous for its paintings and architecture, which has an Indian and Kashmiri influence in them.
Dinner and an overnight stay at Alchi Resorts.

After breakfast proceed for sightseeing of Lamayuru Monastery. Lamayuru has fascinating caves carved out of the mountainside. Also known as Yung Drung (Swastika), it is situated on a high promontory overlooking the village and valley. For sheer spectacle value no other gompa can match Lamayuru. Overnight at Lamayuru.

Day 06: Lamayuru – Leh
Finally, you drive back to Leh in time for lunch at the hotel. The afternoon is free to explore the town on your own. Leh is very Tibetan: the national dress, ‘stove-pipe’ hats and felt boots with turned-up toes are much in evidence. The 16th century Royal Palace, which dominates the town, is very reminiscent of the Potala in Lhasa and Tibetan Buddhist monasteries, large chortens, prayer flags and mud brick houses with flat roofs have a dramatic effect on the landscape.

Transfer to the airport to fly to Delhi.

Please let us know the number of people travelling on this tour and we will send you the total cost. We also specialize in customizing the tour. Should you need any changes we would be happy to modify the itinerary.

The tour may include arrangements such as accommodation, travel, meals, permit, guides, activities etc. or services as required by the client.