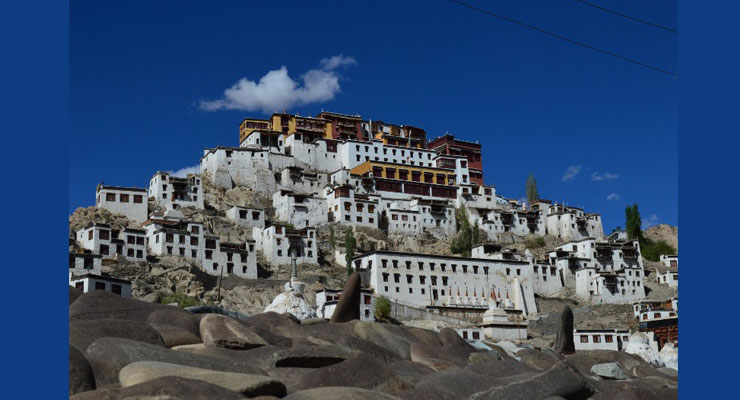 Ladakh is one of the dream destinations for any traveler in India. With its rich history and culture, beautiful monasteries, stunning scapes, and unique wildlife, Ladakh appeals to any sort of traveler.

Lying on the Tibetan Plateau, Ladakh is a high-altitude desert landscape surrounded by rugged snow-capped peaks, and dotted with beautiful high-altitude lakes and mountain passes.

This tour is specially designed to help you make the most of your Ladakh getaway, and experience everything that this special region has to offer.

Arrive at Leh airport by morning flight from Delhi. This flight is one of the most sensational flights in the world. On a clear day from one side of the aircraft can be seen in the distance the peaks of K2, Nanga Parbat, Gasherbrum and on the other side of the aircraft, so close that you feel you could reach out and touch it, is the Nun Kun massif.
Upon arrival you will be transferred to your hotel. Allow yourself a little time to settle in and acclimatize since you have gone from a relatively low elevation in New Delhi to over 11,000 feet! During the afternoon, you can walk through the old town, beneath the Leh Palace, to explore this fascinating city. Overnight in hotel.

Day 02: Leh –Hemis Festival
You have a full day to witness the Hemis Festival. You drive upstream along the Indus River on a broad well-mettled road to Hemis Gompa, crossing over the Indus River at the village of Karu. The most famous of Ladakh’s monasteries, Hemis or Changchub Samstanling (The love palace of the compassionate person), dates back to the 17th century and was built over a period of 40 years (1602–1642 A.D.). Today Hemis is well known for its festival or Hemis Tsechu commemorating the birthday of Guru Padmasambhava.

In the evening you return to your hotel in Leh for an overnight stay.

Day 03: Leh – Phey to Nimoo Rafting – Likir
After breakfast, drive to the start point for rafting down the Indus River. Your rafting run will start at Phey and culminate at Nimoo, the confluence of Indus and Zanskar Rivers. The rafting trip would provide a different perspective in your experience of the natural beauty of the spectacular landscape with deep gorges, towering snow-capped peaks, hilltop monasteries, and hillside villages, besides being an adrenalin boost. From Nimoo you drive to Likir. On arrival check in at your tented accommodation.

Later in the afternoon visit the Likir Monastery, which is situated at the head of the village by the same name. The gompa is believed to date back to the 11th century. Likir is one of the most active monasteries in the region. The gompa has a fine collection of thangkas some of which are now housed in its museum. As you drive up to the monastery, a recently-installed colossal gilded image of the Maitreya out in the open is one of the most impressive sights in Ladakh. Overnight in your tented camp.

Day 04: Likir – Hemis Shukpathan – Ang Tingsmogang
After breakfast, drive across three passes, ranging in altitude between 3580m to 3750m, to get to to Hemis Shukpathan. It is a major village, which gets its name from the cedars, found in the valley, and which also boasts a beautiful gompa. You commence your trek from here. Crossing the village, a short uphill climb brings you to an ill-defined pass. From here there is a steep descent across the mountainside. On reaching the bottom of this valley you will be climbing a rather steep slope to the summit of the Mebtek-La (3720m). On reaching the top, your efforts are rewarded with a bird’s eye view of the next valley. The trek from here to the picturesque village of Ang is an easy half-hour descent. A short walk will bring you to Tingmosgang. This is considered to be the richest valley in Ladakh with apricots, apples, nuts and beautiful houses. At Tingmosgang you will experience warm traditional Ladakhi hospitality during your homestay for the night.

Day 05: Tingmosgang – Lamayuru
Tingmosgang served as one of the capitals of Ladakh in the 15th century. Though most of the castle is in ruins, three temples remain and continue to be in use. On the day marking the three important events in the life of Buddha i.e. birth, enlightenment and parinirvana, people from all over Ladakh including Zanskar gather here making offerings of butter for the lamps, incense and flowers. Your drive from Tingmosgang descends to Nurla from where you turn right for Lamayuru along the main highway.

After checking in to your accommodation you proceed to visit the 11th century Lamayuru Monastery, which is spectacularly located along the valley plain and surrounded by mountains on all sides. According to legend, the arhat Madhyantika, a disciple of Buddha offered ‘torma’ (sacred food) and water to the spirits inhabiting the site to satisfy them. A handful of rain spilled on the soil which caused barley plants to sprout in the shape of Yung-drung (swastika), hence its name Yung-Drung. The great yogi Naropa meditated in a cave, which today forms part of the monastery. The monastery has gradually expanded over the years and newer structures have been built around a large courtyard. The antiquity of this site is evident from the large number of chortens, similar to those at Alchi. You spend the night at Lamayuru.

Day 06: Lamayuru – Leh
Finally, you drive back to Leh in time for lunch at the hotel. The afternoon is free to explore the town on your own. Leh is very Tibetan: the national dress, ‘stove-pipe’ hats and felt boots with turned-up toes are much in evidence. The 16th century Royal Palace, which dominates the town, is very reminiscent of the Potala in Lhasa and Tibetan Buddhist monasteries, large chortens, prayer flags and mud brick houses with flat roofs have a dramatic effect on the landscape.

Day 07: Leh – Khardungla – Hunder (Nubra Valley)
The road journey from Leh to Nubra Valley passes over Khardungla (the highest motorable road in the world) at around 18,300 ft., around 39 km from Leh. From the pass, one can see all the way south over the Indus valley to seemingly endless peaks and ridges of the Zanskar range, and north to the giants of the Saser massif. Nubra Valley is popularly known as Ldumra or the Valley of Flowers. It is situated in the north of Ladakh between the Karakoram and Ladakh ranges of the Himalayas. The average altitude of the valley is 10,000 ft. above sea level. The Shayok and Saichen Rivers drain Nubra. The flat part of the river is sandy & occupied by green farms & myricaria. The villages look pretty with greenery, willow & poplar trees. Till partition Nubra Valley was one of the trade centres, the ancient famous Silk Route passed through this area.

Before proceeding to your camp at Hunder, stop to visit Diskit Monastery perched on a rock overhanging next to a stream, which provides the source of energy used by mills in the area. The monastery is rich, full of thangkas, magnificent giant statues, effigies of the Buddha and old mural paintings in which can be noted a multitude of influences. It was founded by Lama Sherab Zangpo of Stod around 1420 A.D. DISKIT is the main village or headquarters of Nubra Valley, which has a small market consisting of a row of shops.

After your visit to the monastery and shortly after leaving Diskit you will come across sand dunes on the right of the road. Seen in isolation you could well be amongst the sand dunes of the Thar Desert in Rajasthan. It is indeed a strange sight since immediately on the left of the road are rocky mountains that characterize the Ladakhi landscape and in the distance can be seen snow-capped mountains. Overnight in your camp at Hunder.

Day 08: Bactrian Camel Safari at Hunder – Panamik – Samstanling Gompa – Hunder
After breakfast you will get the unique opportunity to ride on a Bactrian (double-humped) camel amidst the sand dunes of this high-altitude desert with snow-capped mountains on the horizon. Thereafter, crossing over the Shayok River you will be driving upstream along the Saichen River to Panamik. The place has a number of hot springs on the right of the road just before entering the village. Panamik is literally the end of the road for this trip, as one has to return from this spot. On the return journey you stop by to visit Samstanling Gompa, founded by Lama Tsultims Nima. The Gompa has some strict rules and regulations like not allowing women in the monastery after sunset and before sunrise, no smoking etc. From here you will drive back to Hunder for dinner and an overnight stay.

Day 09: Hunder – Leh
After breakfast drive to Leh over Khardungla. Afternoon rest and relax or take a walk to the local market. Overnight at your hotel.

After an early breakfast, drive for a visit of Pangong Lake via Chang La pass. The drive takes you through spectacular, amazing scenery, with breath-taking views of the snow-covered Himalayas. The Lake is the highest saltwater lake in the world (4267m), situated along the India-China border. It is about 130km long and 5-6km wide. The Chang-Chenmo range surrounding it from the north provides a spectacular backdrop to the blue and green expanse of its brackish waters.

Drive back to Leh. Arrive Leh by evening. Overnight at Hotel.

Day 11: Leh – Delhi
Transfer to the airport to fly to Delhi. Tour Ends.

Please let us know the number of people travelling on this tour and we will send you the total cost. We also specialize in customizing the tour. Should you need any changes we would be happy to modify the itinerary.

The tour may include arrangements such as accommodation, travel, meals, permit, guides, activities etc. or services as required by the client.

Please fill the form, We will be in touch shortly